My blogs for the next week will feature some of the churches I am visiting on a pilgrimage to Rome.

Below the altar is statue made of St. Cecilia’s body.  The mold was made from her body that was exhumed 500 years after her martyrdom.  The canopy above the altar represents the tent where God dwelled with His people prior to the building of the Temple.

Circular halos are for deceased saints, while square halos are holy people who are still living. 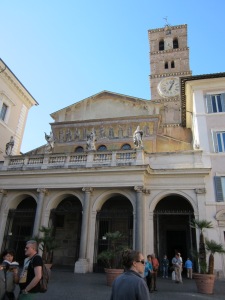 Mosaic above Basilica of Santa Maria

Side altar where we had mass at the Basilica of Santa Maria.