Our day started at Saint Peter’s Square with the Sunday Angelus of Pope Francis.  The square was filled with tens of thousands of people.  Pope Francis spoke of the need to “pray always, without growing weary.”  The readers of my blog were in my heart when I received the Papal blessing.

After the Angelus we journeyed to the Catacombs of San Callisto, the largest of the sixty Roman catacombs and burial site of over 1.5 million Christians.   San Callisto stands on the Appian Way.  Sixteen popes and St. Cecilla were buried at San Callisto (their bodies were removed from the catacombs before the sacking of Rome by the barbarians and entombed in various churches in Rome).  We celebrated Mass in the catacombs.

Father preparing for mass in Catacombs of San Callisto

After mass we visited the site in the San Callisto catacombs were Pope St. Sixtus II and several deacons were dragged away from the altar while celebrating mass and martyred.  As I prayed in the catacombs, I thought about the challenges those who were buried San Callisto faced in practicing their faith.  I prayed to have the perseverance they had when facing similar challenges.  I prayed to preserve in charity, with faith and hope in Christ Jesus.

We ended the day at the Church “Domine Quo Vadis?”   The Church is built on the site where it is believed that St. Peter, when fleeing Rome, encounters Jesus on the Appian Way and asks Jesus “Domine quo vadis?” (“Where are you going?”).  Jesus replies to Peter, “Romam vado iterum crucifig!” (“I am going to Rome to be crucified again?”).   While at the church, I prayed for the courage to follow Christ, for God always provides what is best for us, we only need follow in faith. 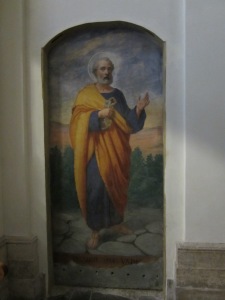